How do the costs of NATM and Cut & Cover tunnels compare?

A detailed cost comparison between Cut & Cover and NATM construction methods was carried out for a pedestrian tunnel at Dulles International Airport in Virginia (USA).  The   tunnel, which serves as an underground corridor for pedestrians between two of the airport terminals, is approximately 235m long.  The NATM option has a cross sectional area of 85m² which is comparable to a typical subway station cross section.  The crown of the tunnel is located 4.7m below the ground surface, and the bottom of the invert at 13.1m below ground surface. A significant portion of the tunnel’s crown is located in a mixed face (i.e. soil and rock interface).  Also, several existing utility lines traverse the alignment of the tunnel, such as fuel, storm, sewer and fibre optic lines. The construction time was estimated to be around 50 weeks.

Based on the preliminary engineering, the Cut & Cover version was envisioned as an open-cut construction with typical support for excavation consisting of shotcrete with tie-backs, soldier pile and lagging.  The cross section was 10.8m wide and 5.9m high with a minimal overburden.

The comparable construction costs and shorter construction time as well as the substantial advantage of low surface impact by the NATM alternative convinced the owner to proceed with the project as a mined tunnel.  In this case, the NATM solution was estimated to be 25% cheaper. 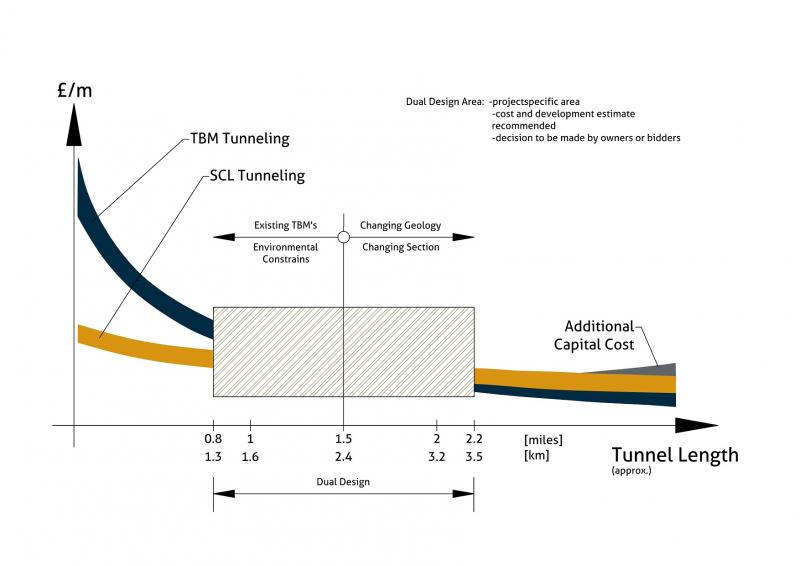